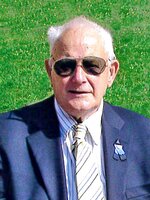 Born in Westville on October26, 1930, he was a son of the late Archie and Janet “Lena” (Boehk) MacQuarrie.

Bill worked for the Department of Highways as a heavy duty mechanic for many years.

He was predeceased by his wife Gladys (Pearce) and sister Isabel Dowell.

There will be no visitations or funeral service. A graveside service will be held at a later date at Heatherdale Memorial Gardens. Donations in his memory may be made to the N.S. Heart and Stroke Foundation.