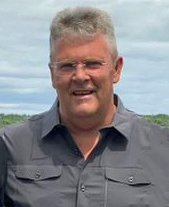 On Thursday, May 6, 2021, David James Chabassol of Abercrombie, NS, passed away at the age of 52. Dave had the best belly laugh. His presence filled a room. We were blessed to be loved by his huge heart.

Dave met his wife, Karyn (Saunders), 30 years ago at Saint Mary’s University. Following university, they married and had two sons, Ryan (Sofía Guzman) and Brent (Karlee Tatlock). These two boys were his greatest pride in life. He spent countless hours with them: rearranging work to watch them play sports or for family vacations and taking them for day adventures on the weekends so he could spend as much time with them as possible. He considered himself so blessed to have gained two daughters in Karlee (his Peanut) and Sofía ( with whom he loved to debate life topics) and he has become a proud “father” to them both. Dave loved spending time with Ryan and Brent and their friends. He would spend hours listening to their stories and telling them his own.  He always hoped he had made some small positive lasting contribution to their lives.

Dave took great pride in being a hard worker. He started work when he was 14, biking from Mt William to Pictou Landing to work on Dalling Tree Farm. Larry and Dave spent hours in the fields talking philosophy and having great laughs together. He worked there until he finished putting himself through university at the age of 25. Dave took a few years break from his formal education between high school and Saint Mary’s University during which he also worked for Jim Battist’s garage on the Sunrise Trail. He enjoyed those years often telling stories about the guys he worked with and people he came to know that came into the garage. After earning a Bachelor of Commerce (finance) and a Bachelor of Arts (economics and philosophy) at SMU Dave entered the financial services industry at the age of 26 and at the age of 29 he was the appointed the youngest Branch Manager in Canada at RBC Dominion Securities. He went on to be Branch Manager at Scotia McLeod where he was awarded Eastern Region Manager of the Year in 2002 and named to Presidents Council at Scotia McLeod every year from 2002 until 2014. In 2012 Scotia McLeod promoted Dave from Associate Director to Director of Wealth Management. He was also awarded the Paul Harris Fellowship by the Rotary Club for building a school for girls in Uganda.  In 2014 Dave took a medical leave from Scotia McLeod due to the discovery of a genetic chronic illness.
Dave helped many people over the years, often refusing any public thanks or even private acknowledgment. Dave was a caretaker in the truest sense of the word. He provided many with opportunities to reach their potential and always defended the underdog. Often these opportunities changed lives. He worked tirelessly providing for his family and sharing the benefits of his work ethic with many friends and the community.

If you would like to honour Dave’s memory, perform an act of kindness: a random act of kindness for a stranger or help someone you know is struggling and ask them to pass it on sometime when they can. Cremation has taken place. There will be a private family burial at a later date per Dave’s request.  www.eaglesfuneralhome.ca