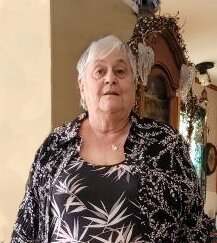 It is with sadness that we announce the death of Donna Maria Austin, 75, of Plymouth.  Donna passed away on Saturday, October 22, 2022 in the Halifax Infirmary with her husband by her side.

Born in New Glasgow on August 4, 1947, she was a daughter of the late John and Marjorie (Henderson) Kontuk.

Donna was a nurse of the Aberdeen Hospital,  working as an O.R. nurse until an injury forced her to leave her work.

She will be dearly missed by her husband of 36 years, Robert Austin; sons, Steven and Darren Facey; 5 grandchildren; sisters, Joanne Cornett and Joyce Jobe; brothers, Billy Kontuk and Peter Kontuk; and father and mother in law Bob and Mary Austin.

She was predeceased by her brother John Paul Kontuk.
There will be no visiting or services by request.

A special thank you for Terry, Joanne, and Caden for going out of their way and beyond while Donna was going through a very difficult time.

Share Your Memory of
Donna
Upload Your Memory View All Memories
Be the first to upload a memory!
Share A Memory