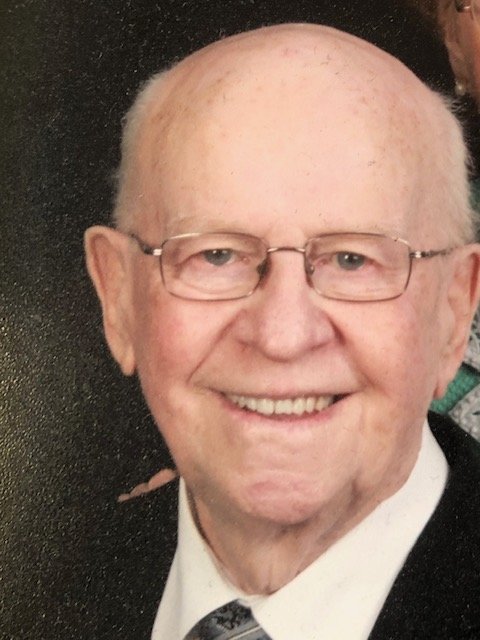 His family will receive visitors on Sunday, September 22 from 2-4 pm and 7-9 pm at Eagles Funeral Home.

Donations in Bill's memory may be made to St. Paul United Church or a charity of your choice.

William "Bill" Charles  Allen of Westville passed away peacefully at the Northumberland Veterans’ Unit, Pictou on Sunday, September 15, 2019 at age 93.

Bill was born on March 23, 1926 to Margaret Porter and William Allen and lived all his life in Westville

He and Hilda Fitt married in 1946, starting a family with Bruce who died in infancy, followed by Sharon, David, and foster-parenting Lois.  Bill retired as a provincial civil servant in 1986.  After his family, his first love was the church.  He became an Elder at St. Paul at the age of 22, sang in the choir, taught Sunday school and became Sunday school superintendent. He served a term as chair of Pictou Presbytery, attended Maritime Conference, and was a commissioner at two meetings of the General Council.  For 40 years he, Hilda and the family attended Berwick Camp where he became President of the Berwick Camp Association for a term. He was a board member and chair of the Windsor Elms Home.  Family and church weren’t his only loves.  He and Hilda sang in numerous choirs, were members of a square dancing group, and spent much time with the Good Terns camping group.  He was a member of the Western Star Masonic Lodge, the Eastern Star, and the Royal Canadian Legion. He and Hilda enjoyed their friends, travel, being hospitable, and visiting the elderly, the sick and the lonely.  Bill spent the last two years of his life at the Northumberland Veterans' Unit where he received excellent care.