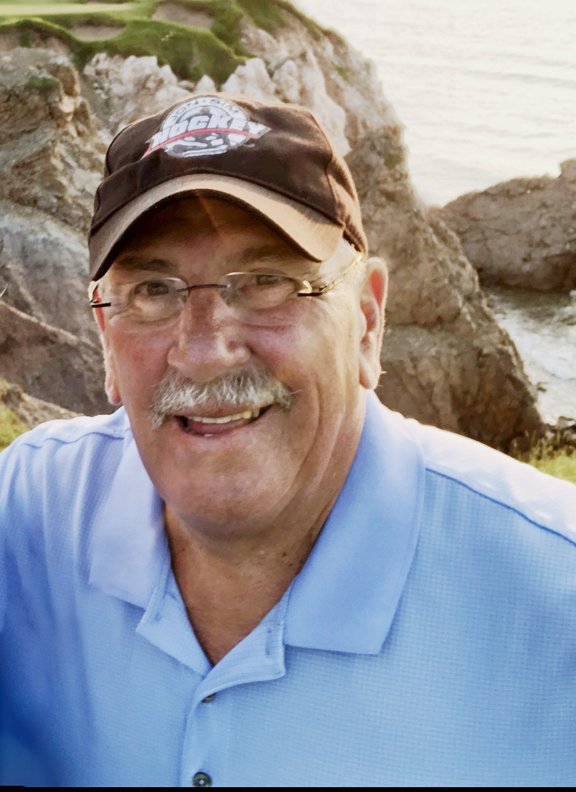 Donations in Hugh's memory may be give to the PCMHA. Donations can be left at the Funeral Home or credit card information may be emailed to: eaglesfuneralhome.ca

It is with profound sadness that we announce the passing of Hugh Robert Sim, "Simmer," of New Glasgow on November 1st, 2020 after a short illness.

Hughie was born on October 6th, 1951 in New Glasgow, Nova Scotia. He was the youngest son of Hugh and Effie Mae (MacIsaac) Sim.

Hughie is survived by his loving wife of 47 years – Joanne (MacEwan) Sim, and his three boys: Mike (Meaghan), Jon (Marla) and Andrew (Lyndsay) who he was so proud of and loved with all his heart. Hughie was a loving "Papa" to Landon, Lane, Ewan, Avery, Rhys, Jude and Kennedy. He was the youngest brother of Florence Bishop, Elizabeth "Betty" (David) Latimer and Isabelle (Gary) MacGregor. He was the son in law to Judith MacEwan and brother in law to Michelle (Frank) Parsonage, Lisa (Brian) Cullen, Beth MacEwan and Stephen MacEwan.

Hughie has many nieces, nephews and cousins with whom he shared a special bond. He also shared a special relationship with the family’s two exchange students from Germany: Annika (Henke) Malone and Inge Zetzsche, and his goddaughter, Jodi (Sutherland) Blondon.

He is predeceased by his parents, his brother John and his wife Carole, brothers in laws Murray Bishop and Bobby MacEwan and father in law Mike MacEwan.

Hughie’s career in financial services brought him to communities throughout the Maritime provinces: Halifax, Charlottetown and New Glasgow. For 36 years, Hughie was a proud and dedicated employee of Scotiabank. Throughout his career at Scotiabank, he found his passion for selling mortgages where he excelled at a national level and was recognized many times for his great customer service, among other sales achievements. After retiring from Scotiabank in 2017, he continued his enthusiasm for selling mortgages by joining The Mortgage Group (TMG Atlantic) where it did not take him long to become a strong contributor to the team.

Hughie loved watching hockey. He was happiest watching his seven grandchildren play competitively and was the kids’ biggest fan. Hughie spent any chance he could in the rink supporting their hockey dreams, giving them limitless advice, as well as encouraging them in all aspects of their lives outside the game.

Hughie played competitive hockey in his younger years and began coaching and scouting in his early 20s. He was widely regarded in the community as a fierce competitor and had an unmatched intensity on the bench. At the same time, he was also known to develop hockey players of great character and always demanded that his athletes exhibit a strong work ethic and respect for both opponents and coaches. Hughie frequently spoke about all the great relationships he developed over the years mentoring players at the NHL, university and major junior levels, and former athletes who went on to accomplished careers outside of hockey.

Hughie loved laughing and sharing stories, loved his life and loved his family. Hughie was, and will always be remembered as, a Champion.

Public visitation will be held Thursday, November 5, 1-4 pm and 6-8 pm at Eagles Funeral Home, 1611 North Main Street, Westville. Due to COVID-19 restrictions, a private funeral will be held Friday, November 6 at 11am with interment to follow at Auburn Cemetery, Westville. The funeral will be live streamed at   http://youtu.be/5aMTJHKJ2gE  For those who so choose, donations in memory of Hugh can be directed to the Pictou County Minor Hockey Association(www.pcmha.com) where a fund has been established in Hugh’s name to support minor hockey coaching. See online for credit card donations and in person donations can be left with the Funeral Home. . Other donations may also be made in Hugh’s name to a charity of your choice. The family would like to thank the incredible medical staff at the Aberdeen and VG Hospitals for their kindness and care.

Share Your Memory of
Hughie
Upload Your Memory View All Memories
Be the first to upload a memory!
Share A Memory