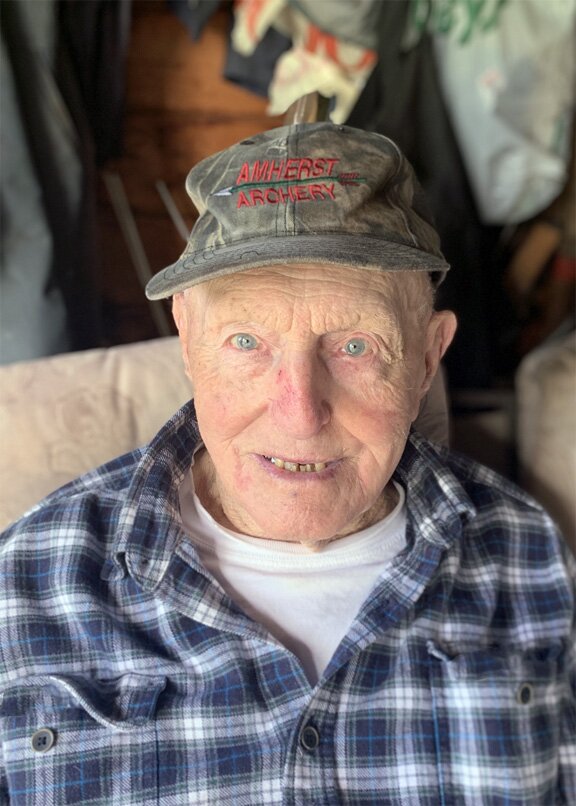 His funeral service will be held at 20'clock on Saturday, May 5 from First Presbyterian Church, Stellarton with Rev. Charles McPherson officiating.

Chesley Elmer Canning of Stellarton, passed away at home surrounded by his loving family in his 97th year in the early morning of Thursday May 5th 2022.

Born in Westville on July 21,1925, he was the son of the late Archibald and Mary (Cunningham) Canning of Westville.

Chesley moved to Stellarton in 1950 with his sweetie pie Doreen, whom he spent 75 years with. He never said no to a drive, he had wit like no other, always had a smile on his face, and anyone who drove by always knew to give a beep and a wave as he was always sitting in the garage. While in the garage you could always catch papa feeding the birds by hand as he always attracted them. He was known as papa Chet to anyone and everyone who knew him. Chesley also enjoyed working in his garden in the spring/summer months, doing word searches/colouring, listening to old country music, latch hooking mats, and watching old western movies.

Chesley worked in the Allan Shaft, was a heavy duty mechanic and retired as a foreman from the town of Stellarton in 1990. He was the oldest surviving member of the Westville Legion Branch 35.

Surviving is his brother Russell (Dorothy) of Westville, Brother in Law Tom (Wendy) of Kingston Ontario, and Sister in Law Florence Langille of Westville.

There will be no visitation by request but there will be a funeral for Chesley and Doreen both on Saturday May 7th 2022 at 2:00pm at the First Presbyterian Church  Stellarton with Rev. Charles McPherson officiating. A reception will follow in the church hall and burial to follow that at Brookside Cemetery in New Glasgow.

Share Your Memory of
Chesley
Upload Your Memory View All Memories
Be the first to upload a memory!
Share A Memory