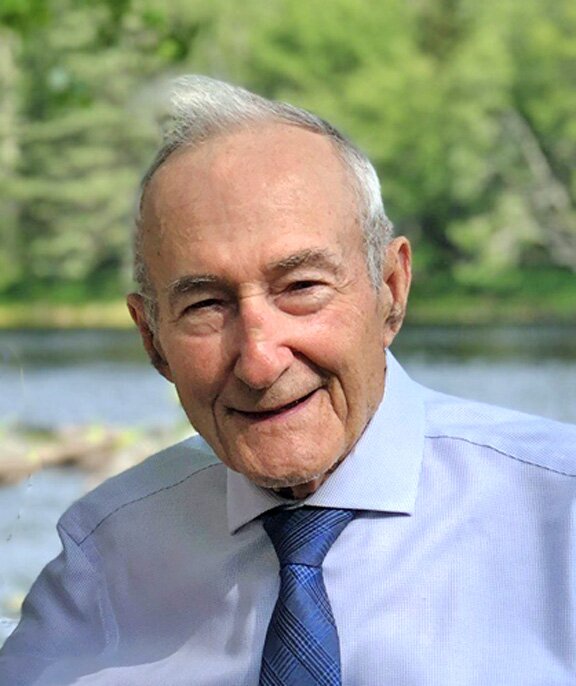 A public funeral service will be held at 11 am Tuesday from The Church of The Holy Name , Westville with Father Peter MacDonald officiating. Registration will take place at the entrance of the Church.  Masks are require with NS Covid Regulations in place.

His funeral service will be streamed live to the public at the Facebook page of Stella Maris -Holy Name Church.

It is with heavy hearts that we, his family, announce the passing of J.W. Raymond Cyr, age 90, of Westville. On September 1, 2021, at the Palliative Care Unit of the Aberdeen Hospital, New Glasgow, Raymond crossed over, in unity with the Holy Spirit, surrounded by his loving family.

Raymond was raised in Pictou, graduated high school from Pictou Academy and attended St. Francis Xavier University, Antigonish, receiving his BA in 1958 and his BEd in 1960. He also received a Post Graduate Degree in Education from the University of New Brunswick and continued his academic studies at Laval University, Quebec. Raymond began his career with a one-year term in Shelburne, NS and spent the rest of his teaching years as a Senior French Teacher at West Pictou District High School. He taught at West Pictou from the first day the school's doors were opened until his retirement in 1991.

Raymond was proud of his school and his students, and he would always say that the students of West Pictou were the "best" because they were full of school spirit.  He shared his passion for learning with hundreds of teenagers over the years. Raymond enjoyed his job and always taught with an air of dignity and mutual respect.

He had a very compassionate nature and a curious mind. He was never afraid to ask a question, and even if he did not like the answer or if he did not share the same view point as you, he always made a sincere and empathetic effort towards understanding.

A loving husband, father, and grandfather, Raymond's greatest pride and joy were his children and grandchildren. He loved spending time with them, watching them grow up and marvelling in their accomplishments.

Raymond enjoyed spending his winters with Lorraine in Florida, a good game of golf and a nice glass of red wine on occasion. He had a great sense of humour, was always chosen to say grace at our family gatherings, had a love of seafood and a zest for life that comes directly from being a Maritimer. His favourite songs were Frank Sinatra's "(I did it) My Way" and Al Martino's "Daddy's Little Girl". He exuded patience, kindness and good will; Raymond was a true gentleman.

We are very grateful for the support of the Palliative Care Team and the 4th floor nursing staff of the Aberdeen Hospital. Thank you for your kindness, caring and compassion.

Raymond is resting at Eagles Funeral Home where a private visitation will be held.  A public funeral service will be held at 11 am Tuesday from The Church of The Holy Name , Westville with Father Peter MacDonald officiating. Registration will take place at the entrance of the Church.  Masks are require with NS Covid Regulations in place. Donations in his memory can be made to the Aberdeen Hospital Palliative Care Unit or to the Pictou County Foodbank.

His funeral service will be streamed live to the public and may be watched  at the Facebook page of Stella Maris -Holy Name Church.

Raymond will be sadly missed and affectionately remembered by all of us who love him.

Share Your Memory of
Raymond
Upload Your Memory View All Memories
Be the first to upload a memory!
Share A Memory